A 4 Point Inspection is often required when binding new insurance coverage on your home.  This inspection is needed once the age of the home is 30 years or greater, however some insurance carriers require it as early as 23 years old.

What is a 4 Point Inspection?

The four point inspection covers four main components of the home.  These components include: 1) the Roof system, 2) the Plumbing system, 3) the Electrical system, and 4) the Heating and Air systems.

Every insurance company has their own guidelines on what is acceptable and what is not allowed.  However the following breakdowns are customarily acceptable or not acceptable to admitted insurance carriers in Florida. This is not an exhaustive explanation of the 4 point inspection. Always hire experienced and respected inspectors as they will know the ends and outs of these very specific insurance inspections and will be able to help guide you and answer any questions you may have.  Please also read our blog post OUTLAWED: SIX Home Insurance Deal Killers.

I hope you learned a little more about 4 Point Inspections.  Please be sure to allow Pensacola Insurance Inspections the opportunity to handle any inspection needs you may have.  Thank you so much. 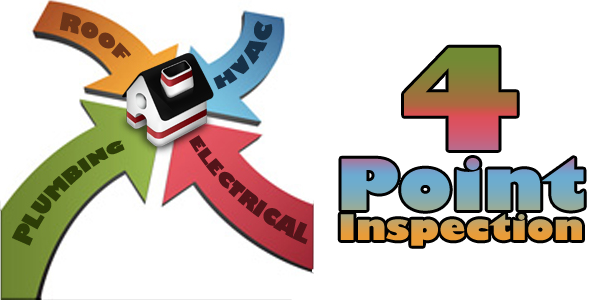 Call Pensacola Insurance Inspections TODAY! Even if your policy doesn’t renew for 6 months, most companies will give a pro-rated discount credit even before your renewal! With an average of $600 in savings, you could be losing $50 every month this inspection report is not on your file!